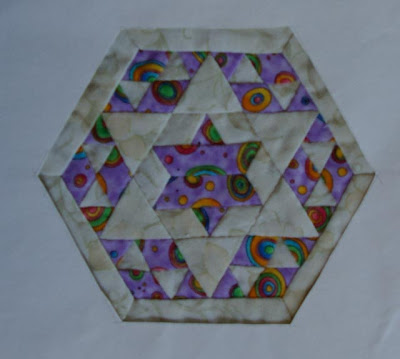 Wow I just looked at the date of my last post....Dec 20th and that must have been posted early as I know I was overseas at the time.
Isn't that terrible but life has just been so hectic that I totally forgot about posting.
To make up I am not going to post lots of photos of projects I have been working on.... actually I haven't really been doing a lot of quilting and I haven't finished many things either.

However here are two things I have been working on. 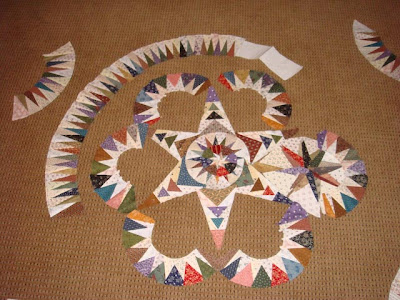 The first is another block from Raconteur - The Storyteller's Collection.  I have now finished about 350 of the blocks and they are looking very cute.  I hope to finish the last of these blocks by the end of April and then begins the major task of joining them together.

Definitely won't make my original deadline of 2010 Sydney Quilt Show...yes I did mean 2010.
The second is from a class which I attended last year.  The Sydney Quilt guild organised for Jacqueline de Jonge to run workshops on paper piecing.  I wanted to do her Elements of Nature pattern but it wasn't offered and so I did Morning Glory.  My colours were nothing like her sample and that at the above stage everything fitted and looked good.  Unfortunately the next stage was not so successful so I am at present doing a lot of frog stitching.... or will when I retrieve this project from the ignore it and it might disappear pile!
Posted by cinzia at 10:42 PM 1 comment: