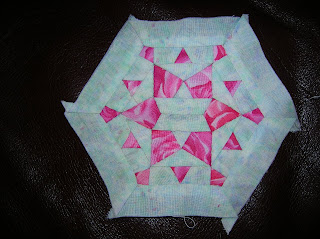 Another of my mini hexagons.  I haven't been doing many of these lately although I have cut many more.
Will get back into it in a few weeks ... perhaps after I clean my sewing room ... and finish painting the laundry... which I am avoiding right now  .. I have another half an hour before I need to start on the second coat .... not my favourite way to spend a Sunday .. but at least once it is finished I am free for another eight years.
I can't remember what I named this block but will update the info when I check back
Posted by cinzia at 1:33 PM 1 comment: 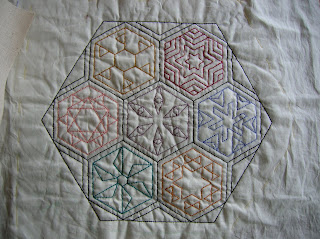 Strange name for a quilt I know but whenI was a child I had always considered it strange that people would meet for afternoon tea and have cucumber sandwiches... that this was what the 'better' people did.  Strange what young children think?
Anyway this is a block from my new stitchery quilt.  The designs come from my quilt 'Raconteur' which I am still in the process of making ... and probably will be for a year or two as it is now up to 436 different blocks.... oh for some forward planning rather than my  usual whimsical this seems like a good idea planning.
Anyway I think there will be either eight  different blocks in 'Cucumber Sandwiches' ... although I have already drawn up seven of these I have also started doing another different set on osnaburg so I don't know when anything will be finished... oh for an attention span longer than two weeks.
I did a mental count of WIPs and can count more than twenty at present.  I hate to think how many I actually have since this was only counting what I can remember without bothering to look for them.
Posted by cinzia at 1:17 PM No comments:

Where have I been?

Wow it is weeks since I have written here.  What have I been doing?  Well a lot of nothing ... I have a clean house including having washed the blinds and have cleaned out SOME of Richard's bomb site.
I have been sewing lots but finished nothing.  I have so many projects on the go and so desperately want to finish them but just haven't got there yet.
I have started doing hexagon stitcheries.  Saw a really interesting one by Nikki Tervo but figured that I could design my own based on the Raconteur quilt.  As I already have over 400 designs figured I would use some of them.
Did a couple on muslin with soft pastel type colours and they looked really cute until I saw a stitchery done on osnaburg.  Previously I hadn't been too keen on it but this time it seemed to have a bit of class to it and of course the green eyes of jealousy wanted some of that too.
So I have designed some more and am doing those on the osnaburg using hopefully autumn colours.  I am going to draw them all up and then take them with me on our holiday to Europe as I figure I can get a long term project in for very little weight or room.
Tomorrow I will upload some photos of my projects ... quite a variety there.
Posted by cinzia at 1:13 PM No comments: