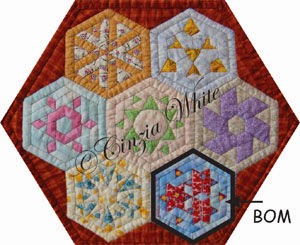 Space Invaders that mindless game that stole many hours from me. I loved this game and played it incessantly when I had time to fill in a place I didn't want to be
Paul wondered why I was so good at it when we met :)
Posted by cinzia at 11:49 AM No comments: 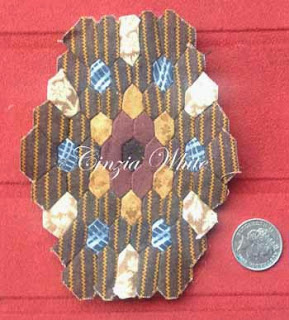 Well here it is the latest middle. I know you will probably find this easy to believe but I did actually make up both of the middles from my previous post and neither was quite right. A few more trials... oh if only the sewing could be as qick as the photographing... mind you I don't always have a charged camera with which to take a photo so you have missed out on seeing several of my trials. I think I have more time than sense as they say.

I bet if I went up to a 50c piece it would dominate the photograph.
Posted by cinzia at 3:04 PM No comments:

The Joys of Plane Trips

Well have finally returned from Houston. Fantastic quilt show and a definite must if you ever have the opportunity. Will upload some photos when I get the chance but tonight just thought I would tell you abut our flight home.

Paul had figured that two days would be enough and so we flew into Houston Wednesday evening, spent two days at the show and then went off on a cruise around the Caribbean. If you ever want to pick up a cheap cruise leave your booking until a week before it departs.. we scored over 80% discount which isn't to be sneezed at.

At the end of the cruise all that was left was the long haul flight home. Paul has these over to counter antihistamines which they say sometimes may make one drowsy. Well they totally zonk me out. Anyway as we had to fly from LA to Sydney I decided that I may as well have one and get some sleep.

Don't know how long I'd been asleep but I semi woke up when I tried to get a 'comfortable' position. Lights are all on rather than dimmed as per usual but I think little of this and go back to sleep. I repeat this again sometime later and as I move Paul tells me that we are going to have an emergency landing.
As I roll over I think, 'Thanks, just what I want to know when I can't swim. We are going down and I'm going to drown!' I then promptly fall asleep again. I told you these tablets are lethal.

Sometime later I again wake as I roll over, plane seats in economy have never been known for their comfort. Paul says we have landed in Hawaii. This wasn't on our flight plan last time I'd looked but I figured at least I hadn't had to swim. I roll over and go back to sleep.

Well after we arrive back in Sydney, two hours late but alive and not wet, I complain to Paul about his unsettling news. 'Like how was I expected to get decent sleep with the thought that the plane was going down in the middle of the Pacific.'

He doesn't believe the bit about not getting any sleep as I managed to sleep almost the entire 18 hour flight... it was supposed to be 14 hour flight.

As it turned out there had been a medical emergency. Announcements had been made regularly over the intercom, first asking for any doctor on board and then informing passengers of the emergency and need for the diversion.  This forced them to divert to Hawaii where paramedics came racing down the plane and carried this little old lady out. She was seated about five rows in front of us.

After which we had to wait for the plane to be refuelled and then continued to Australia.
I'd missed the whole thing. Instead I had the occasional thought that perhaps it wouldn't hurt if I knew what part of the plane was on fire or had fallen off... in between sleeping that is :-)

The joys of flying.
Posted by cinzia at 8:44 PM No comments:

Posted by cinzia at 1:53 PM No comments: 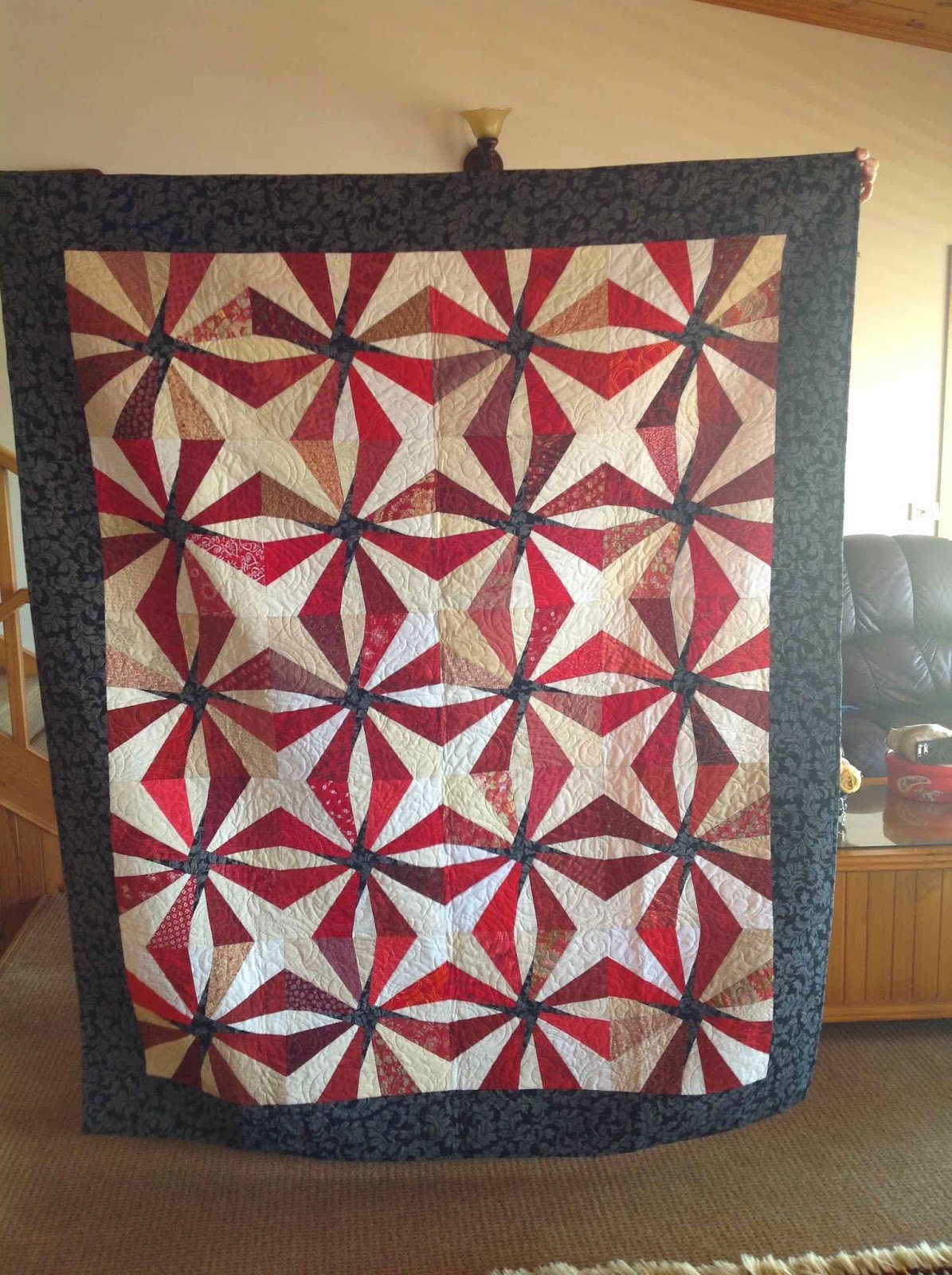 Don't you like making group quilts? They get finished so much faster than your own quilts. Well when I put it like that I suppose I should say 'they get finished' period!

This quilt was made by the Red Berry Quilters and will be their raffle quilt for next year's Berry Quilt Show. I'm not sure but I think it will be in April as they have decided to move it from the original date as someone had already booked the hall. There will be some really beautiful quilts on display so keep April free. I will let you know the actual date as soon as I  know it.

Btw if you would like a copy of the patterns for this just click on this link for a pdf of the foundation papers. You will find there is also a second document for completing the border stars that although were in my original design they decided not to use. Send me a photo if you decide to make it.
Posted by cinzia at 4:06 PM No comments:

Should Have Flown South 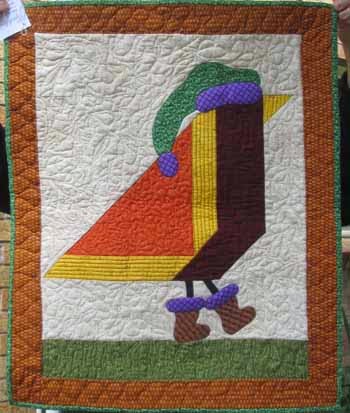 Well it definitely looks like this little fellow is ready for the winter. Pity he didn't prepare ahead of time and flown south then he wouldn't have needed the hat and boots. He is a funny fellow and I found him in Quiltmakers 100 blocks volume 9 I think. I can't find the magazine otherwise I would also write down who the designer is. She created a little beauty.

It's funny the things we learn and remember. When I was only a littlie..yes I know it was several years ago but anyway at that time all of our books were published in the northern hemisphere .. or at least I believe they were. So why do I have this belief. Well it's the bit about birds flying south for the winter. Now I live in Australia and the only thing south of here is Antarctica and even as a young child I knew it must be pretty cold down there in the summer and a lot worse in the winter so why were they flying south. Well I was also a very well behaved child and so I NEVER dared to question those who knew more than me and so I held this belief for a long long time.
Posted by cinzia at 3:55 PM No comments:

Posted by cinzia at 2:04 PM No comments: