The first free BOM for 2014 is Turnaround, which is one of the easier blocks with only thirteen pieces. The choice of fabric reminds me of a firestorm in the wind blowing round and round with sparks flying out everywhere.
Posted by cinzia at 6:59 PM No comments:

Collection 2- Where Did That Name Come From?


Rice Pickers
Rice Pickers was made when Paul and I were travelling through Asia and we drove past these rice fields. I had never seen anything so lush and was amazed at where the rice could be grown. I always thought it had to be grown in large flat areas, as it needed constant, or regular flooding. You can tell by this comment that agriculture was not a subject I excelled at... or was awake for. It appeared to be up the side of what had once been an almost vertical hillside. The villagers had cut away at the sides of this small mountain/huge hill and terraced it entirely. Although there were no rice pickers at the time the large triangles in this block reminded me of those old straw hats we saw being worn in old time TV shows and movies.

Crème de Chantilly
It was 2009 and we were visiting Paris to see our eldest son who was studying there. It had been 18 months since we had last seen him and it coincided with Paul's birthday. PJ bought a birthday cake complete with Chantilly cream, a favourite in Paris. The colours and design reflected the cake and its decorations. Our household has never worried about pink for girls and blue for boys.

A Merry Christmas
We have a star on our Christmas tree that we bought before children. Like us it is a little more worn at Christmas but still there in pride of place. Christmas has always been for Paul, aka the elf, the most special of times so I designed this block to reflect our Christmas star.

Flamboyance
I remember watching a news item about the Sydney Mardi Gras and seeing the floats pass by. I found the costumes and colours used amazing and so flamboyant. I tried to show the swirling and activity of those costumes in this block.

Cafe Crème
Our local cafe makes a very good cappuccino and I would go there every Saturday after my Pilates class with some of my classmates. This block was named after our regular outing.

Not Here Thanks
On the way to Sydney we pass through a suburb with a huge Nuclear Free Zone sign. One of our boys at the time said if there were bombs dropped would that mean they were not allowed to land here? Older child said how do they get the nuclear medicine to hospitals if they are not allowed to come through here.  Out of the mouths of babes as they as they say.
So the spaces on the block surrounding the nuclear symbol represent this attitude of ’Not here thanks.’

I Love Lucy
This was one of my favourite TV shows as a child. I always saw Lucille Ball as being surrounded by many people all of whom loved her. 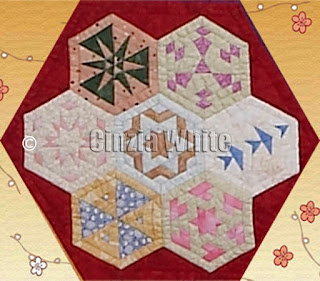 Posted by cinzia at 4:44 PM No comments:

What a Difference Colour/Fabric Makes

Posted by cinzia at 7:50 PM No comments:

Posted by cinzia at 7:41 PM No comments:

The Way to your Heart

Posted by cinzia at 7:31 PM No comments: 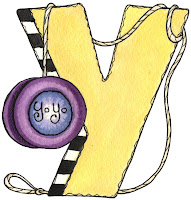 Now isn't that a cute letter Y.  The categories for this week are
# bedroom
# winter
# hot
# and from the sewing room - yahoo!!!! Something that you were/are really pleased you finally finished.  Speaking of finished Y is the final Scatterday letter.
It has been a fun year and there has been some interesting reading in the fortnightly posts. I look forward to checking out the posts for our ultimate week.

Publication day is 7th December...oops better make that 21st December (thanks Vireya for letting me know - some days are just so hectic.. you all know the feeling) . I wonder how many people will be able to make it for this date... thanks everyone for participating .
Posted by cinzia at 1:30 AM 4 comments:

Madeleine only started sewing her blocks last week and she has already completed Flamboyance.
Initially she had difficulties because, of all of the blocks to choose to start with, she chose one which had somehow managed to sneak through my tester and unfortunately some of the diagrams needed to be reversed. So of course the pieces wouldn't fit... wouldn't you know it!
Once she checked with me and I fixed up the diagrams she flew along. Although she  was all thumbs at the start it is obvious that she managed to overcome that. Great block.
Posted by cinzia at 8:25 AM No comments:

Collection 11 - Where Did That Name Come From?