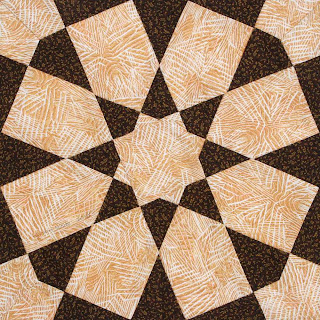 Well this has been a fantastic month.  I have finished so many things but to top it all off I have also had a block selected for  Quiltmaker's 100 Blocks Volume 3.
The block is called Khanam's Surprise and  I have almost finished a quilt using it. I will upload a photo of it on Tuesday, which is my day in the blog tour.
Quiltmaker is organising a blog tour all week and by visiting the blogs of the designers you will have the chance to win a copy of the magazine. Each designer is giving away one or more copies so there are many up for grabs.  I think Quiltmaker itself is running some competitions so don't forget to check out their site either.
Be sure to check back here on Tuesday for the blog tour as you will have an opportunity to win your own copy of the magazine and also to see how different this block looks when actually made into a quilt.... I only need to add two borders and quilt it by then.  OK let's be honest chances of getting it quilted is Buckley's as my machine pedal needs replacing and I only ordered the replacement yesterday.
Posted by cinzia at 12:07 PM 4 comments:

Well the holidays are almost over and I will need to return to work :(  However I thought I would share a few photos from the recent AQC.  The work was amazing and the photos I have uploaded are just a few from the sixty plus which I took. 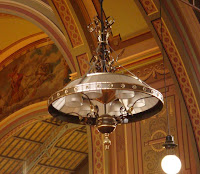 The first is the chandelier from the Melbourne Exhibition Centre.  I thought I had taken more photos of the centre but they didn't turn out too well but it is a truly impressive building. 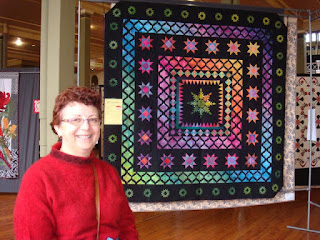 The second photo is my quilt,Turkish Delight.  I am definitely over this quilt but it was still a buzz to see it hanging there. 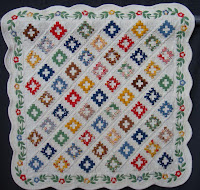 The next one is a miniature.  Gorgeous colour choice and oh so cute . Although the photo doesn't show it  the   precision in her piecing was impressive.. 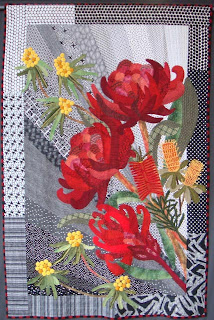 This one was made by one of the teachers, sorry I don't recall her name.
I just loved both the subject and the colour choice of this quilt.  There were several in this series and all worth another look.  I think I took at least two photos of each and different details... perhaps one day I will try the technique.  No let's be honest applique is never going to feature in my list of enjoyable activities. 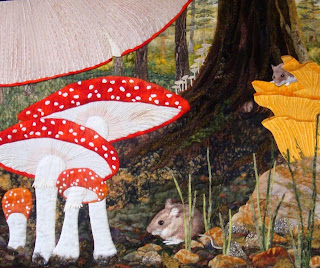 Now if ever I could have a quilt made by someone else this would be it.  The different techniques which Kay H? used are amazing.   And aren't those mice so lifelike?
If only I could improve my layout skills that would be impressive in itself. 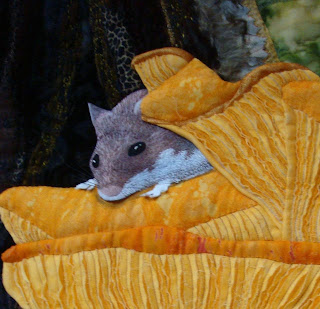 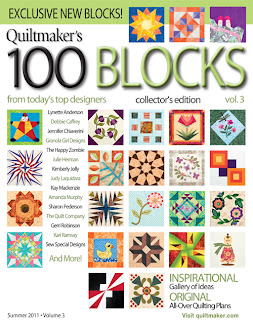 Woo hoo!! Just received an email from the editors etc of Creative Craft Group.  These are the  people who, among other things, put together the Quiltmaker Special Issues and their next issue is the third in the 100 Blocks series.
This is a series of magazines in which they publish 100 original blocks from both established and up and coming designers.  I was very fortunate and had a block published in volume 2 and now I have discovered that not only will one of my blocks be included in the next issue but also it is included on the cover.
100 Blocks Vol. 3 is at the printer as of early Thursday (US time)! I can’t wait to see it! Designers who have a block included will receive their complimentary copy around the 4th week of April... so only another three weeks to go.  Yes I realise that they said around the fourth week but I am assuming that is for US designers not those of us in the colonies.
So which is my block?  Well if you look carefully at the included photo, my block is the brown and tan one which is the second block on the second row.  I will take a photo of my block when I recharge the batteries for my camera tomorrow to show it to you more clearly.  So why do I still have the block you may ask? Well because my first effort was only 11.75in square and the requirements were for 12in.
I can't wait to see the magazine.  the last one had so many fun blocks and I am positive this one will be also be full of new exciting blocks.  Actually if I had a daughter or granddaughter I think the one on the top right corner of the shoes peeping out from the skirt is gorgeous.
Posted by cinzia at 9:05 PM 1 comment: