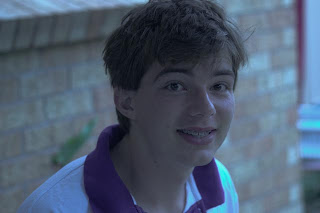 Well Richard has been offered a scholarship to Johns Hopkins Uni in the US.  It is unfortunately in Baltimore which it appears is the crime centre of the US.  While searching on the web for some more information Paul found a site that stated that Baltimore managed to top the states for every type of crime except for two... sexual assault and police corruption.  Unfortunately it was found in followup investigations that those figures had been doctored so as to lower the recorded levels.  Hey number 1 for all crimes is pretty impressive.
On the other side they filmed Hairspray there!  One needs to appeal to pop culture.
They are flying him over to check out the place before he makes a decision.  Probably because they figure with a reputation like that they need to input some information to sway prospective students their way.  Richard said the topic of their first session is 'Baltimore... it's not that bad!' Bit of a worry if you ask me.
Posted by cinzia at 12:49 AM

Please don't be too worried. I live about 30 minutes from Baltimore and go there quite often. I actually went to school there myself. There are pockets that he'll want to stay clear of but many University and professional schools there as well. He'll learn where not to be. Congrats on him getting in :)